Energy harvesting has already come a long way in its short history. Just a few years ago, the idea of energy harvesting belonged more to the pages of science fiction than real life. If there was ever a time when clean energy was relevant, it is now. In recent times ambient energy harvesting has emerged as an extremely important component in the IoT revolution. A team of researchers from UMass Amherst have come up with a way to produce electricity from the humidity in the ambient atmosphere.

For many decades now, humankind has been treading a very precarious line. We have known for quite some time now that our relentless pursuit of economic growth and technological progress is coming at a tremendous environmental cost. Now more than ever, in the light of the global coronavirus pandemic, it is clear that we need to marry our progress with ecological awareness. Our footprint as a species is simply too large. One of the most immediate steps involved is investing in sustainable energy sources. In the last few years, we have made huge strides when it comes to energy harvesting technologies.

Energy harvesting and the IoT revolution

Energy harvesting is especially pertinent in the context of the Internet of Things revolution that is presently underway. As of today, we have already deployed billions of sensors around the world that are collecting data of various types. If you think that’s a lot of sensors, this number is only going to increase exponentially in the coming years as we move towards an increasingly connected world, where the line that separates the physical and the digital is rapidly disappearing. We might be looking a trillion sensor world not all too far in the future

It is imperative that this revolution of “connected things” is powered by a sustainable source. Using batteries to power this ludicrous number of sensors is just not practical in any way, least of all, from an environmental standpoint.

Ambient moisture has already had scientists smacking their lips for quite some time now. Ambient moisture represents a universal and ubiquitous power source which, if harnessed properly, could power a lot of existing technologies, especially in the realm of the Internet of Things.

However, so far, the moisture-based energy harvesting technologies we have had could only produce very sharp and brief bursts of energy, i.e less than 50 seconds of power generation. This was because of the lack of a sustained mechanism of conversion.

As recently as February 2020, researchers from the University of Massachusetts Amherst have claimed that they have succeeded in using protein nano-wires to produce a continuous stream of power. This project was a collaboration between an electrical engineer and a microbiologist at UMass Amherst.

The researchers are calling this device “Air gen”. As part of a futuristic-sounding scheme, the researchers used thin-film devices which they harvested from protein wires obtained from a microorganism called Geobacter sulfurreducens. Using these nanometre-scale protein wires, the researchers were able to generate a sustained voltage of 0.5 volts with a current density of around 17 microamperes per cm².

The key principle that makes this possible is an autonomous moisture gradient that forms inside the film when it is exposed to humidity in the surroundings. This device is able to connect electrodes to the protein nanowires in such a way that power is generated from moisture that is ubiquitous in the air all around us.

This technology has emerged as a result of an unprecedented collaboration among experts from various diverse disciplines. This interdisciplinary approach that brings together cutting-edge nanoscience, sensor technology and advanced microbiology. Derek Lovely, who is a microbiologist at UMass Amherst, first isolated this microorganism from the Potomac River of North America, over three decades ago. His laboratory was then able to discover this bacterium’s ability to produce protein nanowires that were electrically conductive.

Kiaomeng Liu who is a PhD student in Jun Yao’s laboratory was working on sensors when he noticed something startling. He says “I saw that when the nanowires were contacted with electrodes in a specific way the devices generated a current. I found that that exposure to atmospheric humidity was essential and that protein nanowires adsorbed water, producing a voltage gradient across the device.”

These three scientists joined forces to see if they could create electronic devices that could be made using these protein nanowires.

The Air-gen device uses an extremely thin film of protein obtained from a bacterium called Geobacter sulfurreducens. These protein nano-wires, harvested from the microbe are used to make a film that is 7µm thick. Two gold electrodes are used - the first electrode covers one side of the film while the second covers a small portion of the other side. When this setup was exposed to atmospheric moisture, the film adsorbed moisture from the surrounding atmosphere. This is because of a curious peculiarity - the electrical conductivity and surface properties of the nanowires combine with the fine pores in the film to create conditions where an electrical current can flow between the two electrodes.

This is not the first instance of electricity being harvested from ambient moisture. But, what makes this device revolutionary is the amount of power that it is able to generate. The power density of this device is exponentially (about 2 orders of magnitude) larger than what has been achieved in the past. The Air-gen device was able to produce 0.4V - 0.6V, continuously, for over two months.

This is an incredibly exciting finding for many reasons. Notwithstanding the caveat that great lab findings don’t always make for commercially viable products that work in a real-life setting, there are quite a few reasons why we should be excited about this development.

This device has already caused quite a stir in the scientific community. It marks a significant improvement over other renewable energy sources. The biggest advantage that this device has over say wind or solar is its universality. Because it doesn’t require wind or sunlight, it can even be deployed inside a room or say even in a bone-dry environment like a desert - i.e. It doesn’t require any significant amount of humidity to be present. The other big point that this technology scores is the fact that the protein wires used are sustainably sourced from living organisms!

This technology could be revolutionary for the future of sustainable energy and potentially, even in other sectors such as medicine. It is eco-friendly, economical and renewable.

The present iteration of this technology, the researchers say, is able to power small electronics but they have larger plans. They plan to scale this technology and make it commercially viable in the time to come. As part of their vision for the near future, the researchers say they plan on coming up with an Air-gen “patch” that could potentially power smart-electronics such as fitness trackers or smart-watches. This would entirely eliminate the need for traditional batteries. They also have ambitious plans for using these Air-gen devices to entirely eliminate the need to charge mobile phones.

Yao says, “The ultimate goal is to manufacture large-scale systems. For example, the technology might be incorporated into paint that could help power your home. Or, we may develop stand-alone air-powered generators that provide power, off the grid. Once we get to an industrial scale for wire production, I fully expect that we can make large systems that will make a huge contribution to sustainable energy production.”

Yao’s lab has been developing many applications using protein nanowires, in addition to Air-gen. This is just the beginning of a new era of protein-based electronic devices” says Yao.

Lovely’s lab, on the other hand, has now developed a new way to mass-produce protein nanowires. Using a species of bacteria called Escherichia coli, they are able to produce large quantities of this material.

In times that are challenging for us as a global unit, these developments give us something to cheer about. They point to a future where the human race can work towards sustaining a balanced ecology rather than be a force that undermines the fine balance of nature.

Runar is the chief marketing officer and co-founder for ONiO. It is his responsibility to link the work and innovation of the product teams to the customer. He is in charge of building the brand, create consumer awareness and advocacy, and drive customer preference for the brand through all channels, every day.

What is Edge Computing? 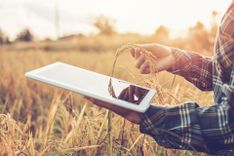 What is IoT - The Internet of Things?